Jamie has a blast at Legoland

Jamie’s ambition was to go to Legoland –  but the journey, the challenges of staying away from home, being among crowds were all pretty challenging for a lad with ASD (Attention Spectrum Disorder).

Wicked World Tours agreed that a trip to Legoland could provide a great learning experience as well as a lot of fun so helped to fund aspects of the travel and accommodation that removed some of the barriers Jamie faced. The following extracts and photos from the trip report show how worthwhile the trip proved to be. Jamie’s Mum Gillian writes:

We arrived mid afternoon and our room was on the second floor. Jamie coped really well and even managed the lift (normally it is stairs only due to fear) as it was lego themed and had a wacky commentary. On arrival at the room it was lego overload and he had to build the lego set he had bought in reception with his pocket money.

That evening we went to the lego restaurant and he had a marvellous time looking at all the lego sculptures and really found the humour in them! There was a kids entertainer and balloon modeller. Jamie got a balloon sword like lots of other boys and he played on the periphery of a sort of chasing/fighting game and loved it.

First day at the park. Staying at the Legoland hotel meant we got early admittance to the park and were able to go on 3 rides before any queues developed. By then we had reached the lego driving school and they showed a driving video detailing the rules of the road to the next set of drivers before they could start to drive. Jamie was very interested in this and turned out to be very conscientious in his lego car and thrilled at his driving licence at the end of the ride. 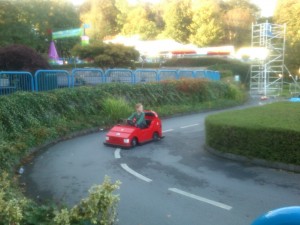 He is also keen on maps and helped navigate the park to the things he wanted to do. As it was not yet half term in England the queues were never too bad, normally you only had to wait for the previous ride to finish. Jamie refused to go on any water rides where you got wet (who can blame him) and we stayed away from the big rollercoasters etc. there was plenty to do and see (a pirate show performance which he sat glued to) and we were able to return to the hotel for a Mum made lunch and TV time so that we were fit to walk back into the park and start again in the afternoon.

We even had a surprise – bumping into the Jamie’s Beaver leader as the scouts were on a trip to London.

Next Day – Jamie had identified at breakfast the areas of the park we had not yet visited, mainly the shop and the cinema! He wanted to head straight for these. We did a treetop ride 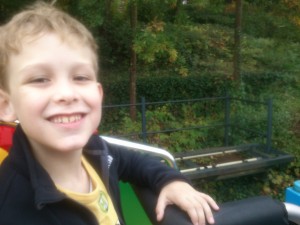 (up high but slow and not a rollercoaster) and he loved it so much we did it twice. He also braved the cinema to see lego Chima (the latest craze and he is allowed to do the 7-14 sets now you know!) it was 4D so we sat at the side to ensure we did not have to so we sat at the side to ensure we did not have to experience the fully effects of the rain/waterfall/snow but he did enjoy it and asked later in the day to go back and see it again. The shop was an amazing place for Jamie as it had the full lego Chima range. Thankfully a lot of there sets are 8-14 in this range so he quickly self restricted himself to the remainder. He chose one set (that was our family rule) and we also purchased the lego Chima lion cape, sword and shield so that he had a Halloween outfit (as we don”t do scary). He was very content then to just spend some time looking at all the other lego boxes and the many displays they had on show. 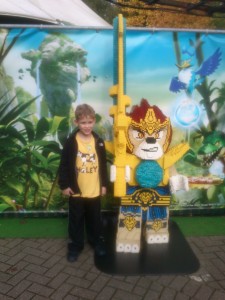 We also had great fun in the build and test centre. Jamie made a car that he had to race and then build a tower that had to withstand the earthquake platform. He was most chuffed about his successes here.

Lego have pop badges with lots of different characters on and it you find a golden brick you get free admittance to the park. Jamie was quite good at looking at everyones badges. He did 2 swaps to get the lego chima badges he wanted and in reception that evening his eagle eye spotted the elusive golden badge. He was so proud of himself but didn’t get the concept that you had to surrender the badge in order to get the free day pass so we just kept the badge.